is head of the division of Endocrinology and Metabolism at Rush University Medical Center. Dr. Bianco also co-chaired an American Thyroid Association task force that updated the guidelines for treating hypothyroidism. 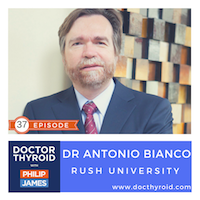 Dr. Bianco’s research has revealed the connection between thyroidectomy, hypothyroidism symptoms, and T4-only therapy.  Although T4-only therapy works for the majority, others report serious symptoms.  Listen to this segment to hear greater detail in regard to the following topics:

The National Health and Nutrition Examination Survey (NHANES) is a program of studies designed to assess the health and nutritional status of adults and children in the United States. The survey is unique in that it combines interviews and physical examinations.